I would like to introduce a new contributor to Mostly Science, a Mr. Bryce Harper. Bryce is a student of the humanities and if you are interested you can check out his blog here. Full disclosure, Bryce wrote this article and I edited it, adding only a minimal amount of additional text. Hope you enjoy.

There are so many ways to be fooled. No human ever walked the earth without falling victim to gullibility. As we grow older and further develop what is known as our theory of mind, first coined by Premack and Woodruff in 1978, we tend to grow out of our evolutionary gullibility. But for one reason or another large groups of us still fall prey to this ever lurking provocateur of deception.

Take for example, Belle Gibson. A 24-year old Australian that had convinced large numbers of followers, through social media, that she had cured her non-existent brain cancer with a pseudo-healthy eating program. She had a phone app, a book contract and over $300 000 in donations before anyone cared to fact-check her claims. This vile act of deceit warranted Penguin Publishing to cease production of her book. I still managed to find myself a copy and what I read therein was nothing short of absolute falsification.

The following words have a stark resemblance of something a sociopath would write. When asked why she thought her social media account had garnered such a strong following she stated (in writing): “Authenticity and integrity. It really is that simple. Too many people over-edit themselves. There’s not enough honesty out there. It’s human to feel sick, to ask questions, to search for answers. People value seeing straight through the crux of you and your message. I used to be quite self-conscious and sheltered, but now I embrace rawness and honesty. Never refine yourself in a way which takes away your heart, message and truest self”. Obviously not simple enough when you have to falsify your entire medical condition. And yes, people do value seeing straight through the crux, and eventually your crux would become cellophane.

Perhaps the now infamous Doctor Oz is another glaring example of our gullibility. He has a formidable jaw line, a spacious forehead, and an inviting smile – all evolutionary dispositions to invite us in. Who would of thought this seemingly well-intentioned doctor was peddling products for cash – regardless of their efficiency or scientific backing – as revealed by a senate inquiry. An email correspondence between Dr. Oz and Sony CEO, Michael Lynton, was uncovered no thanks to the Sony hacks of 2014.

In the exchange Dr. Oz highlights that he has been “carefully following the wearable device market” and is “pretty close to consummating a longer term relationship”. He makes no mention of: any research, health-benefits, or anything remotely hinting that he is a health-care professional. He seems only concerned with the possibility of a business contract. This email, coupled with Dr. Oz’s pedalling of bogus dietary supplements, has prompted over 1000 doctors calling for his resignation from Columbia University where he holds a position as a cardiothoracic surgeon.

A personal favourite of mine – someone who pushes nonsensical jargon harder than just about any mammal to ever grace this planet – Deepak Chopra. He is unbearable, unintelligible, embarrassing and if at the very least, a charlatan. Chopra has pushed his spiritual quantum quackery so far that he has an entire website dedicated to generating satirical quackery quotes on his behalf. Here’s one for your amusement: “The human nervous system is an ingredient of karmic facts”. A quick glance at Chopra’s Twitter feed will provide similar, humorous, results. Amassing a Twitter following of 2.4 million users from around the globe – it’s not hard to see why Chopra’s business grosses approximately $20 million a year, according to Dr. Paul Offit – a staunch opponent of Deepak’s vague spiritual ramblings. Deepak’s foundation, The Chopra Foundation, has acquired tax-exempt status under the 501(c) internal revenue code. The foundations claim, as worded by Chopra, is to “advance the cause of mind/body spiritual healing, education, and research through fund raising for selected projects.” Charging up to $30 000 per appearance for public “lectures” it starts to raise questions – is this a legitimate spiritual organisation? Or just a front for Chopra to push his alternative Ayurvedic medical practises?

Now of course not all of us buy into any of this. We are often labelled cynical or close-minded as if the definition of skepticism was never considered. We are the party-poopers, the nay-sayers, the destroyers of dreams (I was once given this title; I revelled in its wake), the materialists, the realists or as I like to call us – the investigators. We don’t always get things right – but we admit our wrongs wherever we can. We strive for truth because we’ve come to realise that a life lived in denial of reality is a life not worth living.

So why are some of us more gullible than others? Why do some of our friends and family take things on face value and leave the fact checking to others? I’ve often asked myself this question. I’m obviously not any less human than the next person, I don’t have any more grey matter, and my cognitive ability is generally no greater or less than anyone else. Perhaps I have more time to read, and my interests do align with a lot of the subject matter. But this explanation is not satisfying, especially when I know almost every single adult in the first world has instant access to the greatest library in human history, the internet.

Skepticism, along with scientific enquiry, are legitimately the corner stones of our societies. Civilisation didn’t meander into the 21st century on the back of a cart with no horse. Carl Sagan observed this when he said “we live in a society exquisitely dependent on science and technology, in which hardly anyone knows anything about science and technology.” Now I’m no Sagan, but I would go one extra step to say – people are intimidated and naturally pseudoskeptical of science and technology. (The same individuals are all to quick to let everyone know this via a status update on their wifi connected Iphone 6.)

This isn’t to say everyone must labour away at university to be skeptical. I’m not a scientist, my current studies don’t involve a single shred of scientific study. This hasn’t stopped me from sharpening my analytical skills to be a little more wary when I’m told to believe something. For most of us the idea of a scientific consensus, or consensus in any field, makes complete sense. We learn to trust particular sources and we learn to discredit others.

There is no shortage of literature on this all-to-human subject. Our willingness to believe just about anything has been written about for centuries. Thomas Paine putting pen to paper inside a French prison noticed that “everything we behold is, in one sense, a mystery to us.” Modern experimental neuroscience and psychology have been probing these delusional beliefs and gullibility; providing us with, once again, all-to-human results. The fact is, we are the exact product of what you’d expect a social mammal with large adrenal glands and small frontal lobs that evolved on the Sahara to be.

As I ponder our social evolution and our careen towards the irrational, the likelihood of individuals conning us is not all surprising. So as scientists, humanists, materialists, and all other creeds of rationality, what are we to do? The truth is – I believe – not a whole lot. Well, not a whole lot different. We owe it to our species to spread and promote the enlightenment, to encourage people to think rationally, but we owe nothing to individuals or groups who are trying to do the exact opposite. Of course, for certain things that are fraud and harmful to society, we need not just education, but strong policy. Education won’t clamp down on charlatans, but laws will.

Public debate and discourse are excellent for helping those of us who may be fence dwellers – the inquisitive individuals who are asking questions one way or another. But the only debt we owe to our foes is that of humiliation and ridicule. I will not entertain ideas for the sheer theatrical of political correctness. Deepak Chopra never deserves the same stage as Stephan Hawking, Belle Gibson should never have more writing space than an Oncologist, and sell-outs, like Dr. Oz, should be stripped of their credentials. If not for his shady deeds, at the very least out of respect for the thousands of doctors and surgeons practising ethical medicine.

It can seem disheartening; it can appear pointless. But the truth is, civilisation has always been carried on the backs of the few; there’s no reason to stop now. Science funding is diminishing, grants are harder to come by, and the public wants the fruits of scientific labour but wants no hand or know-how when it comes to ploughing the field. It’s a confronting scene – especially when I think about how frustrating it must be for scientists and researchers.

Things could be a lot better, there’s no denying it. If anything, and at the very least, they could also be a lot worse. Scientists, philosophers, writers, poets, artists etc – we must continue living the lives we live, if not for the ungrateful many, then for the dignity of our species and for the entertainment and joy we can bring one another. 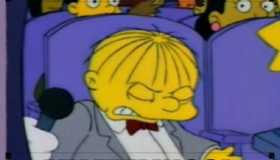 Ow my feelings! A woo-full discussion of Chinese Medicine
Dr. Christopher Haggarty-Weir May 4, 2015